Copying Old Photos to the Computer

My son-in-law recently slid into his 50s, and my 12 year old granddaughter wanted to give him pictures from his past.  So guess who picked up the tab on a Shutterfly book?  Of course that also meant copying and digitizing about 40 old photographs.

I was okay with that since I picked up a Gitzo lateral arm on eBay for $59.00 when it retails new for $175-$200.  A little about this first. It is made to fit a 2 series Gitzo tripod, and it is only about 13 inches long.  I thought that was going to be short, but no problem. Once you add the ball head to the arm - which you just removed from the tripod - and then add the camera you can extend about 18 inches; way more than enough. To stabilize this thing I added a 4 lb. bean bag to the tripod center post hook, and looped a shower curtain ring to another bean bag and suspended that from the end of the lateral arm.  Ergo: stability.

(I have 6 or 8 of these bean bags, made from the leg of a pair of jeans. I have them sewn on two sides with a zipper on the remaining side.  Buy the cheapest large beans you can find - great northern I think. The beans - as opposed to rocks for example - provide a rest for your long lens that can be shaped when you need that support,  Empty the beans and pack the bag in your duffle for travel. Also, if you have access to someone who can press a grommet into a corner of the fabric you will want to do that. I run a cheap carabiner through the grommet hole to hang it.)

For this copying exercise I used  a bubble level to square away the camera vertically and horizontally and also the table itself.  You can buy a 2 or 3 way bubble level to fit in the hot shoe of your camera, and then use it on the table. They are dirt cheap from China on eBay. My excellent 105 macro lens was too long for this set up, or the 'copy stand' was too far away and I lost stability. Back to eBay. I have had my eye on a 24-85mm f/2.8-4.0D lens with aperture ring and a macro switch for some time. This lens has been out about 15 years and is still offered new at $740 even while they also offer a similar G lens with VR. I got a used one for just over $250 and it is perfect for copying, for the FE2 film camera, and as a street photography lens. Shop carefully and take your time. It didn't bother me that his was a Canada market lens, because it was too cheap to be repaired when and if necessary anyway.

I took a piece of scrap 3/4 inch plywood and painted it 18% gray.  I had a sample mixed at Home Depot for less than $4.00.  I took in an 18% gray card and they hit it perfectly.  You could also print a square around RGB values of 120,120,120 or so.  There is no consensus, most suggest 118 to 125.  All that said, I also found that digital light meters are actually calibrated to 12 or 13% gray.  That was after the fact, so I added a third of a stop of light as exposure compensation and the shots are right on. Some suggest setting the camera on manual, but I found aperture preferred works better with matrix metering because the values in the pictures change.

While I was in the store I picked up a bar of 1/8" X 1" X 36" aluminum, and at home cut it in half to shape the light brackets for two flash units and drilled 1/4 in holes; two for attachment underneath the table and one on the other end for the cold shoes. When you shape these things try to keep the angle at or under 45 degrees to reduce shadows. Support them in a machinists vice to bend them. The diffusers on the flash heads are important since they render a 14mm field and illuminate the subject to be copied evenly, although they do not focus on it. In fact, they are pointed at the lens in this instance. If your lighting is uneven when you shoot just the painted table for exposure reference, try standing a piece of white paper or mat board behind any underexposed area as a reflector. Turn off the room lights to avoid glare on the texture of the print. 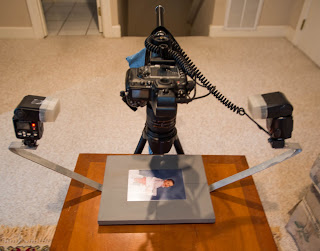 Pictures are worth a bunch of words, so here is what I ended up with:

By-the-way, bend the bars out, not in like I did. It makes the screws holding the cold shoes more accessible and presents a more downward angle. Also, I set this up in my carpeted man-cave. If you have a hardwood or tile floor for the tripod it will be much more stable. 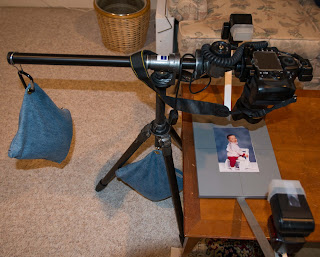 Although it may seem pretentious, I have taken to wearing archival cotton gloves, which I do routinely when I am handling prints and paper. There is some very old stuff I copied, in excess of 100 years, and the fingerprints are there for good. Pretty cheap at 12 pairs for about $7.00 from B&H.

Finally you probably don't realize how much your pictures have faded over the years.  I was playing around in Photoshop, and on one from 1977 I experimented by clicking on Auto Tone under the Image tab. Shock!  Look at the difference:

You not only digitized your family's history for permanence, you restored the images to their original state.