A Quiet Sunday Afternoon in a Shady Garden

I really think this is the first evening I have sat on the deck with  a camera on its tripod watching the bird garden.  The light produced images without shadow, but just the right amount of light for a good photograph.  The only things missing were the company of my wife and a glass of wine.  She was walking and it was too early for wine - but not by much.

Birds are most actively foraging early in the morning, and then again just before dark.  I caught that evening rush, but in truth many are active much of the day as they take in as much nutrition as possible to ensure a healthy clutch of eggs, or begin the long journey to their breeding grounds.  Anyway I had fun, and here are some of the results.

Screech-owls on Skidaway (or not)

Skidaway Island plays host to three owl species: Great Horned Owls, Barred Owls and Eastern Screech-Owls. However the screech-owls have been in decline on the island for the last several years, and they are now only rarely heard or seen.

It is fairly well established that Great Horned Owl numbers decline as human density increases.  Furthermore, these predators hunt only at night (nocturnal), and the birds they take are larger than the screech-owl and then only from open nests.  Screech-owls are a cavity-nesting species. Barred Owls are a significant predator of the small owl, but that predator-prey relationship has been around for eons. And, up until about 2012 the screech-owl appeared to be holding its own. I can accept that recently fledged young are easy pickings for Barred Owls which have been known to hunt by day (diurnal) or during dusk (crepuscular) when they youngsters are exposed. However, historically birds in general make up less than 6% of a Barred Owls diet.  That likely puts screech-owls pretty far down the menu.

There is another hypothesis
I won't even elevate it to theory.  It is the Ten Year Wildlife Cycle. The cycle holds that wildlife populations decline and expand in 10 year cycles naturally (actually 9.3 years) based on a lunar something-or-other. Why then, during the nadir of the decline on Skidaway were 24 screech-owls heard on one night on St Catherines Island*, Liberty County, and 7 owls heard early one morning at an undeveloped location in Chatham County? However, in one long-term study this cycle held. Nevertheless, is there another answer? Probably.

Many birds, indeed  a lot of wildlife, can be badly stressed by anthropogenic (human) noise.  The negative impacts of noise on humans and wildlife is a story by itself.  There is significant research on the broad subject, and as well as specifically on birds. Just because the owl is a night hunter does not mean they are unaffected during daylight hours. I grow more confident of this issue each time I look into the subject, and of course the major culprit on Skidaway Island is the ubiquitous commercial leaf blower. To be continued...

Which brings us to suitable nesting habitat for the few which may be here.
There is really no shortage of decaying trees or limbs with reasonably sized cavities for them to roost in during winter or breed in during the nesting season. However, if we left it to nature we would have less likelihood of accommodating new owls, or monitoring owls that might become established.  Ergo: nest boxes installed at individual homes.

Through the good graces of Skidaway Audubon for financing and Ed Case of Barn Builders for construction, not to mention homeowners who volunteered, we were able to install 15 screech-owl boxes around the Landings in 2016 and 2017.  So far we have had one owl for one night (left) and one maybe (below right on top of the box), also for one night. That was in early January 2018, just a few days before the Blizzard of '18.
It makes you wonder if the events were somehow related, huh?

Sarah Lucas was the proud keeper of that one owl, and there were a couple of lessons to come from that.  First, owls like to hunt by flying over open ground at night looking and listening for exposed prey such as mice (they will eat pretty much anything, including earthworms and moths). Sarah backs up to one of the golf courses. Aha!

Secondly, while owls excrete soft undigested material, the fur and bones are ejected through the mouth as a pellet, which is dropped to the forest floor below the roost. This pellet, which I look for daily, is the primary way of learning if an owl is occupying a nest site.


Finally, you can identify them by sound.  Here is an excellent source for their varied calls: Eastern-Screech-Owl vocalizations

Nest box competition in one word: squirrels.
In short order a squirrel had taken over Sarah's box. To be fair, it is not impossible that squirrels have had some impact on screech-owl numbers as well, but unlikely, and they will also use open nests they construct on tree branches.  So I want to suggest that you not install a box too high in a tree in order to discourage them. Seven or eight feet at the bottom is about the height at which the boxes should be installed. Boxes should be mounted as far away from other trees or structures a squirrel can climb to access the box.


Aluminum flashing, available at Home Depot or Lowes in 10 foot lengths, 20 inches wide, can be installed around the tree just under the box. This has proven effect in other locations. If you are particular about not damaging the tree, there are instructions for alternatives at http://homeguides.sfgate.com/use-tin-protect-trees-squirrels-59357.html For the rest of us, screwing 2 inch wood screws at the top of the flashing will secure it. 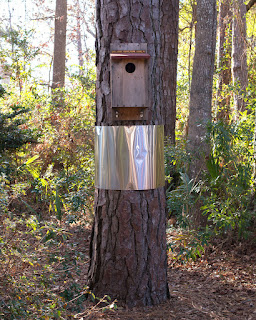 In summary then, boxes can help the cause of screech-owls, on Skidaway, and they should be mounted where there is open space like a lawn close by for them to forage at night. Wild Birds Unlimited carries them or can order them.  If you or your spouse is handy with tools you can build one using the following directions: nest box plans.

Ideally you will have a perch on the inside below the entry hole to allow the young to hoist themselves up.  And, remember to line the box with wood shavings or pine straw  to about 3 inches since the owls will not build their own nest.

*This is the correct spelling for St. Catherines. The possessive apostrophe is not used.
Posted by Russ Wigh at 3:54 PM 2 comments: