The Colonists on Skidaway 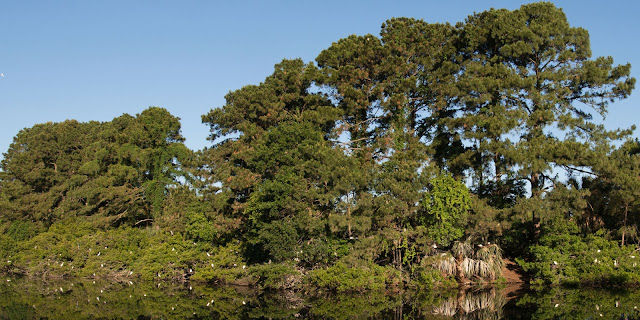 I have always envisioned this shot, but it never turns out exactly as planned.  All those white specks along the water's edge are Snowy Egrets in what is known as a rookery for nesting.  What is not apparent yet is the equal numbers of Tricolored Herons, Little Blue Herons, and some Green Herons mixed in.  As the nesting season gets serious there will be an explosion of additions as young hatch and beg for food.  It will then feel like there is no space for the trees and shrubs! Of course, that presumes that all the noise from unnecessary dumping and removing tree cuttings on the Sparrow Field doesn't scare them off.

A rookery like this is termed colonial for obvious reasons - a lot of birds crowding together. Ornithologists explain this behavior in various ways depending upon the species, but the most obvious reasons are abundant nearby food sources, and protection from predators. This rookery is located on Bartram Road and forms the perimeter of the Sparrow field on two sides. However, note that the nests are at the water's edge, which protects the birds from predation, at least from one side.  The bedlam a Great Horned Owl creates in search of an easy  meal will alert the others to take flight, and in that way ensures the flock will thrive, even if individual birds do not. There is also a rookery somewhat hidden on the far left side of the big lagoon, one on the island in Mid-Point, (much to he chagrin of the surrounding homeowners), another on the right as you drive into Deer Creek, and a less populated one around Delegal Lagoon. There are still others, less accessible, at Priests Landing.

So, if the nesting colonies are regularly successful, why after many years are we not overrun with wading birds?  Thank you for asking. Young birds, when they fledge and leave the nest, most often disperse away from the natal territory. Such an abundance of new empty tummies would quickly stress the food supply for all of them, endangering the resident birds as a whole.  This dispersal process also allows for species to populate new territories, and at the same time breeding with new flocks helps keep the larger population healthy with a diversified gene pool.